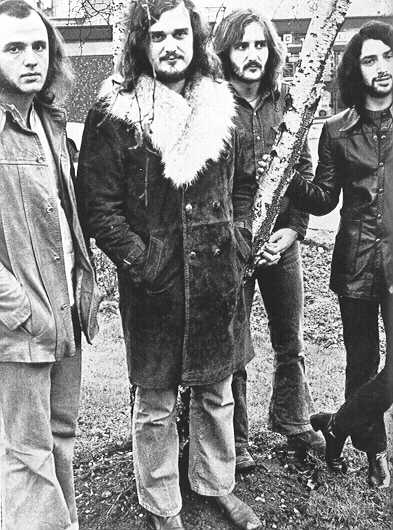 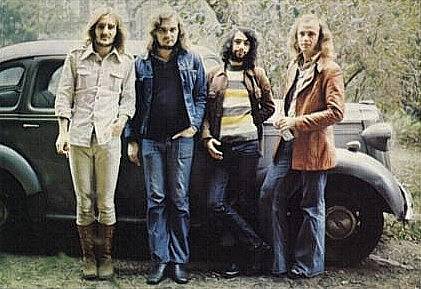 1969
Thijs van Leer, a classically trained pianist and flute player, forms the Thijs van Leer Trio with Hans Cleuver (drums) and Martijn Dresden (bass). The trio initially performs as a backing group for Dutch artists such as Ramses Shaffy and Liesbeth List and also takes part in the musical Hair.

Late 1969 they are joined by guitarist Jan Akkerman (ex-Brainbox) and the name of the group is changed into Focus.

1970
In the autumn the band releases its debut album In And Out Of Focus. First single to be taken from the album is Why Dream. Focus is still in two minds about the musical direction of the band: on the one hand there is the classically oriented work of the old Thijs van Leer Trio, and on the other there is the more rough guitar-oriented music of Jan Akkerman. Nevertheless, the album gets pretty good reviews.

Akkerman, however, refuses to work with Dresden and Cleuver any longer and tells Van Leer that it's either him or them. Van Leer gives in, because he realizes that without Akkerman there simply is no Focus. Consequently, Dresden and Cleuver are replaced by Cyril Havermans on bass and Pierre van der Linden (ex-Brainbox) on drums.

1971
The group receives an Edison Music Award for its debut album and scores a hit with the single House Of The King. The band's second album, Focus 2, is recorded in London. Focus has managed to find a successful combination between classical, rock and jazz, in which there is ample opportunity for Akkerman to do his thing (like on Eruption). Van Leer is not really a singer, but someone who yodels incomprehensible words. The band plays the Pinkpop festival for the first time. The single Hocus Pocus tops the charts in the Netherlands and Germany.

Cyril Havermans leaves to form his own band and is replaced by Bert Ruiter. The foursome is on stage almost every night and their sets can sometimes last for over three hours.

1972
With producer Mike Vernon Focus records Focus 3. The single Sylvia is a big hit. The double compilation album Moving Waves is released. Moving Waves, which contains re-recorded material from the albums In And Out Of Focus and Focus 2, is the band's international breakthrough and Sylvia and Hocus Pocus top the charts on both sides of the Atlantic.

In The Netherlands Focus is by far the most popular band. The group tops the various polls: Best Band, Best Instrumentalist (Akkerman, Van Leer is third), Album Of The Year for Focus 2, and trend setter of the year (1971). For the second time the band plays the Pinkpop festival and also tours the UK for the first time. New single Tommy also enters the charts.

At the end of the year Focus 3 comes out. The album remains in the album charts for no less than 23 weeks. In the UK the band is chosen Most Promising New Act for 1973 by Melody Maker. The band crosses the Canal on a regular basis. Both Akkerman and Van Leer record successful solo albums. Van Leer's Introspection even stays in the album charts for over 18 months.

1973
The band is busy touring and scores another big hit with the re-release of the single Hocus Pocus/Sylvia. The LP Focus At The Rainbow, which was recorded at the Rainbow Theatre in London, is released and the band goes on a successful tour of the US. In the Netherlands the band is awarded a gold record (for Moving Waves) and the Exportprijs ('Export Award'). By the time Rainbow is released the band is at the high point of its popularity in the UK.

Akkerman is awarded Best Guitarist in the World by Melody Maker and has also, as a lute-player, entered the Top 10 of best instrumentalists. He releases the solo album Tabernakel. In the autumn the foursome again goes Stateside. This time Focus shares the bill with Chick Corea's Return To Forever and Joe Walsh. Pierre van der Linden, however, is having doubts about his position within the band and when the band is recording Hamburger Concerto he decides to quit. He then forms Trace with Rick van der Linden (ex-Ekseption) and Jaap van Eik (ex-Cuby & The Blizzards).

Focus in the meantime makes its debut on national TV. VARA TV broadcasts a special about the band and TROS TV broadcasts the Rainbow concert.

1974
The recordings for Hamburger Concerto are rounded off with new drummer Colin Allen (ex-John Mayall and Stone The Crows). The album is, however, greeted with negative reviews and sales are disappointing. Jan Akkerman has a hit with his version of House Of The King, which can be found on Tabernakel. Focus has a modest hit with the track Harem Scarem. The band goes on an extensive tour abroad. Also released this year is the compilation LP Masters Of Rock.

1975
Focus is the only Dutch band performing at the Roskilde festival in Denmark. Colin Allen has lasted only a year before leaving. The relationship between Van Leer and Akkerman is not improving. From the very beginning the two have had opposing views, but mutual respect and the same musical point of view have kept them together. This time, however, musical differences seem the cause of an obvious split between the two. When Mother Focus is recorded (with American drummer David Kemper) Jan Akkerman publicly disassociates himself from the album. He states that the album has been recorded for the US market only. When Mother Focus is released, Akkerman seems to have been right: the album is rather smooth and has little of the magic that Focus once was. The album merely sells on the Focus name.

1976
Frustrated with group's lack of direction and the constraints of working with its commercial ambitions, Jan Akkerman leaves Focus on the eve of a sell-out UK tour. The single P's March is released with without any success. Eef Albers and Belgian Philip Catherine replace Akkerman. The band is also having problems in finding a new drummer: Over a relatively short Pierre van der Linden picks up the drums sticks. The album Ship Of Memories is released and consists of a compilation of odds and ends, remixed by Mike Vernon.

1977
Van Leer tries to revive the band with Bert Ruiter on bass, Catherine and Albers on guitar and Steve Smith (ex-Jean Luc Ponty, later Journey) on drums. Most noteworthy, however, is the fact that the legendary British singer P.J. Proby has joined Focus. This line-up of Focus records the album Focus Con Proby, but Proby's performance is sadly disappointing due to an excessive use of alcohol. The album is welcomed negatively upon its release.

1985
Unexpectedly, Akkerman and Van Leer record the album Focus. On this album they make use of drum computers, sequencers and other electronic equipment. The result is a mixture of jazz rock the, at the time, very popular variant of classical music as provided by the band Flairck. Although the album gets particularly bad reviews in the rock press, it sells reasonably well.

2001
Most of the Focus albums are released on CD in February on the Red Bullet label.

2003
In January Focus 8 is presented in Theatre De Maagd in Bergen op Zoom, the Netherlands. In March the band kicks off for a lengthy tour in South-America, Japan, and the UK. On March 17 Jan Dumée plays at the Mistura Fina, a famous club in Rio de Janeiro. Proceeds go to young patients suffering from cancer at a local hospital.

2004
On February 21 Focus is headliner at the Mexican Chihuahua festival. The album Live At The BBC contains a concert at London's New Victoria Theatre from March 21, 1976. Jan Akkerman had already left the band at the time. His replacement is Belgian guitarist Philip Catherine, while David Kemper from Los Angeles plays the drums. In August Pierre van der Linden again plays the drums at the Aarschot Festival in Belgium. After a concert at the Progday Festival in the US, Focus tours the UK in September and October.

2005
In the spring Thijs van Leer, Pierre van der Linden (back on drums), Bobby Jacobs and Jan Dumée embark on a Brazilian tour. The band opens with the Bobby Jacobs-penned song Sylvia's Stepson. With the song Jippijippieayo the band gets on Brazilian TV show Jô Soares. Jan Dumée writes The Girl From Bangu a tribute to his Brazilian girlfriend. In the fall Focus performs live in the UK and Ireland.

2006
The new album is called New Skin. Apart from some Dutch shows, the band plays on Norway's Classic Rock Festival (May 26, Lillehammer) and on Spain's Minnuendö Festival (July 22). Guitarist Jan Dumée founds new band On The Rocks with John Lawton. Niels van der Steenhoven is his replacement in Focus.

2007
In March the band embarks on a 10-day UK tour. By the end of March Focus is headliner on the Baja Prog Festival, the biggest prog rock festival in Mexico. The album Focus 9/New Skin also comes out in Japan. Focus is invited for the Sweden Rock Festival in June in Sölvesborg. Focus shares the bill with the likes of Aerosmith, Scorpions, Motörhead and Meatloaf. After Sweden, shows are scheduled in Norway and Poland.